A rural myth near the white horse of Kilburn 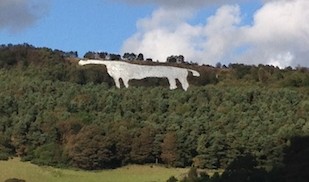 Last week I spent a lovely day walking  around the glorious White horse of Kilburn with stunning open views from the cliff top and fascinating fossil finds in the woodland below. We are fortunate to have the North York Moors National Park Authority helping to care for and promote this most wonderful area of Yorkshire their blog is full of interesting facts and stories and I particularly love this one.
www.northyorkmoors.org.uk

The North York Moors has a long tradition of folklore and legend. These precious tales form part of our local culture and have been passed down from generation to generation. By this continuation, local culture is conserved and sustained.

There are stories connected to many of the National Park’s iconic landmarks but perhaps none more so than Sutton Bank in the south west corner. The area has been settled for many thousands of years from the Iron Age onwards, so it is probably no surprise that there is superstition, myth and legend in abundance about this dramatic looking place.

The retold story below is about why the area known as Whitestone Cliff is sometimes referred to as White Mare Crag – something to bear in mind next time you’re walking along the escarpment edge, perhaps as it’s getting darker and you think there is no one else around and then you hear the thundering of hooves.

White Mare Crag with Lake Gormire in forefrontThe story begins with an Abbot of Rievaulx Abbey. The Abbot owned a white Arab mare, which had been presented to the Abbey. The Abbot took ownership of the horse, as he thought much more of worldly possessions than religious duties. The mare by nature was mild and gentle, but take her up on the moor and give her full rein, and then she showed her true worth.

In nearby Helmsley Castle lived a Knight, Sir Harry de Scriven, who was as fond of good living as the Abbot. He too had a favourite steed, a black stallion with the name of Nightwind. He and Nightwind had a reputation for never having been beaten in the chase. Not surprisingly there existed a considerable jealousy between the Knight and the Abbot.

One day after a hunting trip the Knight passed the inn on Hambleton Plain and decided to call in. Who should be there, but the Abbot. The two men ate and drank together whilst night came on and with it a strong storm wind which promised snow. After a number of hours Sir Harry seemingly recalled a message for the Abbot. A yeoman farmer who a few miles away over the plain was very ill and had asked the Knight to summon the Abbot to come to shrive and pray with him before it was too late.

Sir Harry offered the use of Nightwind, surprisingly the Abbot accepted the offer and also agreed that the Knight, riding the white mare, should accompany him so far along the road, to show the way. The two men mounted hastily and rode off. The wind was blowing wildly; both horses felt the nervous excitement of the coming storm and somehow the ride moved almost imperceptibly into a race between the powerful black horse and the fleet white mare, and their riders.

The mare took the lead but Nightwind, carrying the heavy Abbott, slowly drew abreast and then took the lead. Sir Harry grew angry and the sound of the Abbott’s mocking laughter from ahead did nothing to abate his fury. He lashed the mare, he swore at her, he swore at the Abbot and Nightwind, and then he swore at himself as he realised that the Abbot had not been fooled. The heavier man had the heavier horse, and for all Sir Harry’s skill in the hunt he couldn’t hope to catch Nightwind.

Riding blindly on and on, using his whip mercilessly, Sir Harry completely forgot the landscape and where they were heading. It was too late when he finally realised that the horses were almost at the edge of Hambleton Plain with an eight hundred foot drop before them. A momentary struggle to stop the mare failed, her headlong pace was too great and so with a sickening plunge horse and man went over the cliff edge.

Whitestone Cliffe As Sir Harry and the mare plummeted down towards the sharp rocks below, the Abbot appeared to sprout a pair of horns and a long forked tail and where there had been feet in the stirrups there were now a pair of pointed hooves!

Nightwind’s rider called above the sound of the storm:

But a novice like you must expect broken bones

If you must play a trick on Old Nick!

I’ll see you below when I visit the sick!”

With those words ringing in his ears Sir Harry crashed to his death along with the little white mare.

And the Abbot? He and Nightwind disappeared into the waters of Lake Gormire at the bottom of the crag. A great hiss of steam went up as the lake boiled for a moment.

Lake Gormire towards Sutton Bank Yet that’s not quite the end. Until not so many years ago, people living under the Hambleton Hills would tell you how, when the night was stormy, the spectre of the terrified white mare could be seen plunging over the crag towards the stones below until suddenly she disappeared into thin air.

And the dark bottomless Lake Gormire – well everyone knows that’s an entrance to Hell.

This website uses cookies to improve your experience while you navigate through the website. Out of these, the cookies that are categorised as necessary are stored on your browser as they are essential for the working of basic functionalities of the website. We also use third-party cookies that help us analyse and understand how you use this website. These cookies will be stored in your browser only with your consent. You also have the option to opt-out of these cookies. But opting out of some of these cookies may affect your browsing experience.
Necessary Always Enabled
Necessary cookies are absolutely essential for the website to function properly. These cookies ensure basic functionalities and security features of the website, anonymously.
Functional
Functional cookies help to perform certain functionalities like sharing the content of the website on social media platforms, collect feedbacks, and other third-party features.
Performance
Performance cookies are used to understand and analyze the key performance indexes of the website which helps in delivering a better user experience for the visitors.
Analytics
Analytical cookies are used to understand how visitors interact with the website. These cookies help provide information on metrics the number of visitors, bounce rate, traffic source, etc.
Advertisement
Advertisement cookies are used to provide visitors with relevant ads and marketing campaigns. These cookies track visitors across websites and collect information to provide customized ads.
Others
Other uncategorized cookies are those that are being analyzed and have not been classified into a category as yet.
SAVE & ACCEPT
Powered by